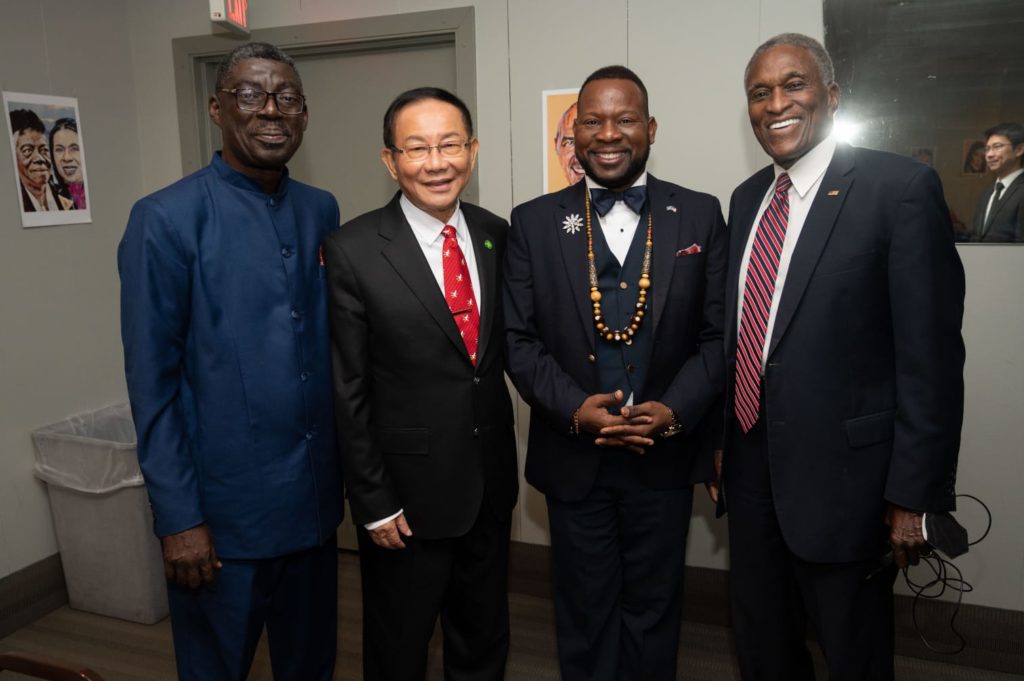 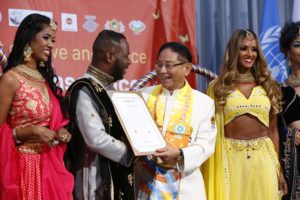 On the morning of September 23, Dr. Hong, Tao-Tze and Leonel Fernández, former President of the Dominican Republic, had a joyful reunion, where Dr. Hong presented President Fernández with FOWPAL’s Lifetime Achievement Award for his promotion of world peace. President Fernández attended FOWPAL’s world leader summit and rang the Bell of World Peace and Love in 2005, and he carried out the wish he made when ringing the bell by successfully defusing a potential war among Ecuador, Venezuela, and Colombia in 2008, saving millions from the scourge of war.

On September 23 at the Westin Hotel New York, FOWPAL, Permanent Mission of Kiribati to the UN, International Federation for Peace and Sustainable Development, African Women Working Group at the UN, Marmara Group Foundation, Foundation for a Drug-Free World Americas Chapter, and COJEP International co-organized the World Leader Summit of Love and Peace and the ceremony of ringing the Bell of World Peace and Love, where President of Kiribati Taneti Maamau delivered a speech, and 13 leaders in various fields rang the Bell and made wishes for peace. Over 100 people from 27 nations attended the event.

Dr. Hong, Tao-Tze, president of FOWPAL, delivered welcome remarks, emphasizing that only by taking concrete actions of conscience to support reconstruction and recovery can humanity prevent or mitigate future crises and benefit the earth and all humanity. He stated, “Conscience is the foundation of human beings and the cornerstone of global stability and sustainability. Conscience guides us to tell true from false, right from wrong, and good from bad, as well as helps us establish priorities. Persistence brings strength. We need to strive for a better tomorrow. That is the way forward and will lead to a hopeful future.”

President Maamau rang the Bell of World Peace and Love in 2016 and delivered a keynote speech at FOWPAL’s World Leader Summit of Love and Peace in 2017. Kiribati also worked with FOWPAL and various Permanent Missions to the UN on a draft resolution titled « Promoting the Culture of Peace with Love and Conscience, » making the UN’s designation of April 5 as the International Day of Conscience possible. In recognition of President Maamau’s promotion of world peace, Dr. Hong presented FOWPAL’s Lifetime Achievement Award to him at the 2022 Summit. 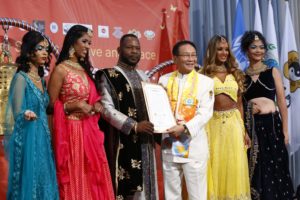 President Maamau delivered a keynote speech at the summit, emphasizing, “While we are proud to learn that the promotion of International Day of Conscience is sustaining momentum around the world, let us also ponder on how can we create and inspire a sustainable world built on conscience. It is imperative to ask this question: How are we willing to apply our conscience to promote a culture of peace and global prosperity?”

Fatima Maada Bio, First Lady of Sierra Leone, wished for a more just and united world where everyone lives in peace. New York City Sheriff Anthony Miranda wished for safety, good health, and peace for everyone. Dr. Monica Sanchez stated, « I hope that all people can learn to respect and love each other so we can create a peaceful world. » Johnny Ford said, « To let peace and love ring around the world so that we will have no more war. . . . A world of peace and love forever. » Ralph Kader stated, « I wish peace will prevail over the world with peace and love. »

To date, 445 influential leaders from 128 countries, including 49 heads of state and government, seven Nobel Peace Prize laureates, UN ambassadors, and other visionaries, have rung the bell and made their wishes for peace. Through the solemn and sacred bell ringing ceremonies, the bell ringers spread their sincere wishes for peace. The consolidated positive energy has served as a powerful driving force for the collective actions of bell ringers and global citizens to foster world peace. 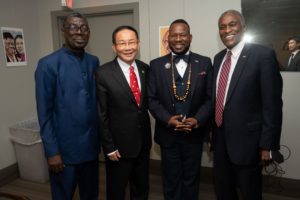 In the capacity of the president of the World Conference of Mayors, Johnny Ford proclaimed the evening of September 23, 2022 as Dr. Hong, Tao-Tze Night. On behalf of the mayor of New York, Johnny Ford and Harlem Globetrotter Robert Richard jointly presented a citation from New York City Mayor Eric Adams to honor Dr. Hong for promoting the UN goals.

The citation states, “Today’s summit serves as a reminder for us all to work towards a better tomorrow, and it also provides an opportunity to commend FOWPAL’s president, Dr. Tao-Tze Hong for his commitment to uphold the values of peace and love shared by people in the five boroughs and far beyond. I look forward to the many years Dr. Hong and every gathered will continue to foster positive change as we unite to #GetStuffDone and rebuild, renew, and reinvent our global city. Now therefore, I, Eric Adams, Mayor of the City of New York, on Friday, September 23rd, 2022, do hereby confer this citation on: Dr. Tao-Tze Hong.”

At the summit, the Foundation for a Drug-Free World Americas Chapter and COJEP International presented the Global Humanitarian Leadership Award to Dr. Hong in recognition of his advocacy of love and peace around the world.

The night before, Dr. Bernard Fialkoff, president of the Foundation for a Drug Free World, The Americas Chapter, and Ambassador Hugues Sanon, UN representative of COJEP International, on behalf of their organizations, jointly presented to Dr. Hong “The Key of Love, Peace, and Conscience” and the Global Humanitarian Leadership Award, the highest honor granted by the two organizations.

President Ali, who was unable to attend the 2022 World Leader summit, because he was already scheduled to welcome a large diplomatic delegation of more than 31 African diplomats coming to Turkey, wrote a letter to Dr Hong Tao-Tzev to thank him for granting him this great privilege to collaborate with such a remarkable organization as Fowpal to co-organize the Global Leaders Summit 2022 during the 77th session of the United Nations General Assembly. 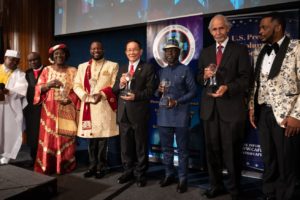 The summit also featured a multicultural feast hosted by Ambassador Hugues Sanon COJEP international and FDFW, including a fashion show by the international distinguished designer, Mr. Prashant Goyal, recital performance by Euneek Kebreau, Violin Piece by Merissa Jane and more. FOWPAL members also presented martial arts performances, dances and singing to convey their kind wishes for everyone. Through an elegant Celestial Peacock Dance, FOWPAL encouraged people to spread positivity and make the world a better place as according to legend, the celestial peacock digests poisons and exhales fragrance. Its elegant Royal Fan Dance, which culminates with a heart-shaped formation, symbolizes that the heart is the root of everything and that conscience is the key to solidarity and transformation for sustainability. Its demonstration of martial arts embodied the purpose of martial arts, which is to prevent war and advance morality. FOWPAL also presented several songs, including “A Prayer for Peace” and “We Can Change the World” to pray for the world.

FOWPAL encourages everyone to endorse meaningful declarations, taking action to support love, peace, and conscience. To date, the Declarations for Human Rights of World Citizens and Peace have been endorsed by over 3.7 million people in 200 nations, and the Declaration for the Movement of An Era of Conscience and the Declaration of International Day of Conscience have been endorsed by over 340,000 people in 200 nations. FOWPAL hopes that everyone will act with conscience so that the world will be peaceful, and that everyone will be joyful so that every family will be happy.

About the Federation of World Peace and Love (FOWPAL): Established in 2000 in the United States by Dr. Hong, Tao-Tze, FOWPAL is an international love and peace organization, with members from around the world. Over the past two decades, FOWPAL has promoted conscience, love, and peace globally. It had worked with various Permanent Missions to the UN through conferences, bell ringing ceremonies, and declaration signing, and was instrumental in the UN’s adoption of the International Day of Conscience in July 2019. It has held nearly 70 webinars in the past two years, fostering conscience-based sustainability.